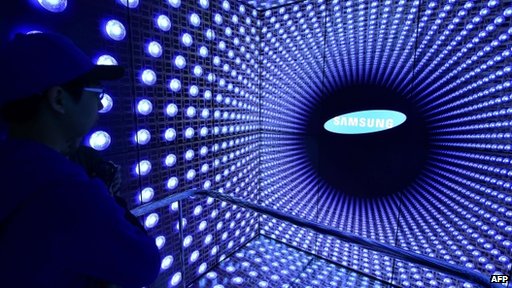 Samsung claims to have found a way to make wi-fi data travel five times faster than it does currently.

It said its engineers had overcome two significant technical problems that had restricted the transfer of data at well below its theoretical limit of 4.6Gbps.

If the technology lives up to its promise, it would mean a 1GB file could be transferred in less than three seconds.

Experts said it could take time for the tech to be built in to gadgets.

In a short statement, Samsung said its engineers were working on wi-fi that operated in the 60GHz band.

Current wi-fi systems use 2.4 and 5GHz bands, and some can operate at speeds in excess of 1Gb per second. Samsung said it had managed to limit the amount of interference data travelling on different channels, suffered when many devices were connected to a wi-fi hub or hotspot.

In addition, improvements to antenna had helped signals travel further and be less susceptible to getting lost while travelling. The breakthroughs mean data could travel at a rate of 575MBps (4.6Gbps).

The first devices built to use the 60GHz wi-fi standard are expected to appear in 2015. Samsung said it was planning to include the technology in TVs, medical devices, phones and smart home appliances.

"With more and more of us using a wide variety of different devices to access our photos, video, and personal data the ability to quickly transfer that data between devices is going to become even more important in the future," said Stuart Miles, founder of tech news site Pocket-lint.

"It will take a couple of years for this technology to filter through to our every day lives," he said.