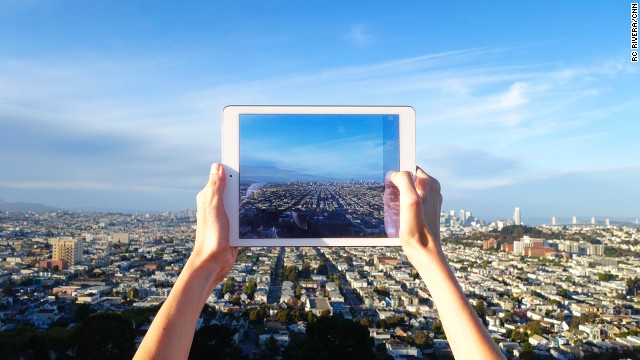 (Bellacom) -- It's the most controversial issue since people started filming videos in portrait mode. Should tablets be used as cameras?

Whipping out a tablet to take a photo is a practice that, like it or not, is going mainstream. Once primarily the domain of dads who don't mind embarrassing their children, tablet photography has become so common that Apple added serious camera features to its new full-sized iPad.

Why, when it's very likely they have a smartphone with a better camera, do people use tablets to take photos and videos?

"I think people look a little silly doing it but I can understand why," said Amit Gupta, founder of Photojojo.com. "It's like the world's biggest viewfinder."

Traditional cameras have small viewfinders that, when you put your eye to them, fill your entire view with a scene. Smartphone screens are dinky in comparison. Someone who struggles to see a phone screen, especially when holding the device in outstretched arms, may enjoy the extra real estate of a tablet.

Editing is also much easier on a tablet. On a smartphone, post-production is usually limited to a few tweaks and an Instagram filter, but a tablet is large enough to be a decent canvas for editing.

Gupta's site is a popular shop for mobile photography accessories. Since the iPad debuted, he has seen a jump in the number of people buying tablet-specific photography tools, like the iOgrapher iPad Video Rig.

For critics, a better view isn't enough to justify pulling out a tablet instead of a phone or real camera. Aside from the camera quality, there are a number of reasons for the stigma against tablet photography -- including what professional photographer and instructor Steve Simon calls "the dorky factor." Wielding a large flat rectangle to take a photo is awkward. The thin smooth frame is made for gripping with two hands or resting on a surface, not holding it above your head while you tap to focus a shot. Light bouncing off the large glossy screen can create unfortunate glare, especially outdoors.

The shape and size can also have an impact on a final photo. Cameras have an effect on their subjects. A person will act differently in front of a large professional DLSR setup versus a smartphone or tablet.

"As a street photographer where keeping a low profile is hugely helpful to capture real moments, using a large tablet is the opposite of 'stealthy,'" said Simon, who teaches a course on street photography. "I find the tablet photographer looks a bit invasive and aggressive holding that big device in front of whatever or whoever they aim it at."

It's not just the person they're photographing that might be put off. Events like concerts are already turning into obnoxious seas of smartphones being held in the air. The only thing worse is the person who holds up a tablet, blocking other peoples' views.

Early tablet photographers clearly aren't too concerned about what other people think, or the hardware's limitations. Apple's upgrades mean the practice could catch on with more people and shed some negative associations.

Remember, there was resistance to smartphone photography at first, too, but it took off because people always had the devices in their pockets and sharing was instant. The photos weren't great quality but using a phone was convenient, and "the best camera is the one that's with you" became a rallying cry.

The iPad Air 2's main camera is now competitive with the iPhone 6. It has an eight megapixel sensor and a number of camera features previously only found on iPhones, including time-lapse video, slow-motion and burst mode. Apple says its new iPad Air screen has been redesigned and given an anti-reflective coating to reduce glare by more than half.

Inside, there's a more powerful graphics processor, which makes the tablet a great tool for editing. The number of full-featured photo and video editing apps for the iPad is growing: Apple demonstrated the new Pixelmator iPad app at its press event, using it to remove an unwanted oryx from a desert scene.

There are still many valid reasons for not using a tablet as a camera, but the upgraded iPad camera chips away at some of them. The increased range in sizes for mobile devices is also helping blur the lines between phones and tablets.

"There's going to be less stigma because everyone's toting around these bigger phones," said Gupta. "It's going to become a little easier to justify pulling out the iPad."