Play
Update Required. To play the media you will need to either update your browser to a recent version or update your Flash plugin. 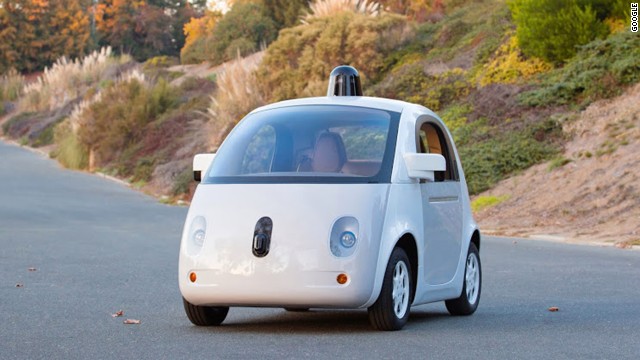 A working prototype of Google's self-driving car has cameras and sensors, but no permanent driver controls.
STORY HIGHLIGHTS

The company unveiled its latest self-driving vehicle on Monday, and it looks like a cartoon koala crossed with a smart car wearing a fez.

Unlike the mock-up car Google first shared in May, this version is fully functional. It even has real headlights. The round, white and gray car is designed without permanent driving tools like a gas pedal or wheel. However, to comply with California state law, there are still removable, temporary controls for the required "safety driver" -- a real person who needs to be in the car and ready to take over in an emergency. The goal is to eventually remove any interior controls so that passengers can take a nap or knit while the car does all the work.

Google's self-driving car team will continue to test the vehicle on a private track in California, where it works its way around traffic lights and mock construction zones. Google has said it's interested in launching a pilot program for the cars in the coming years.

When the tech company first started experimenting with self-driving technology, it modified existing cars, like a Toyota, Audi and Lexus, by adding multiple cameras and sensors and an onboard computer. Now Google has moved on to making its own car from scratch. The car's dome-like shape is optimal for giving sensors the widest field of view.

A car could help put people's minds at ease about the controversial technology. Before self-driving cars can start ferrying us to work, companies need figure out ethical issues (does it hit a deer or crash into the median?), improve basic driving functions, and work with governments on legislation to allow driverless cars on all roads.

Google is just one of many companies developing driverless car technology. Universities and major auto manufacturers such as BMW and Mercedes are working on similar vehicles. Google hopes to have its version on the road by the end of the decade .